What Are the Benefits of Stablecoins? 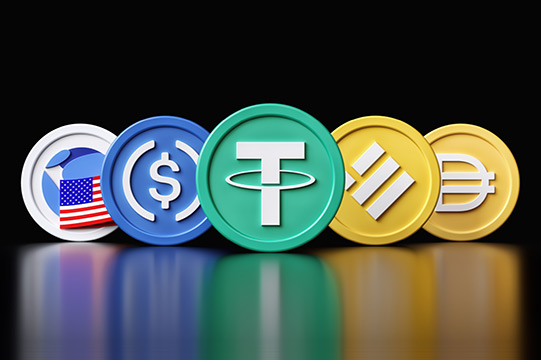 Bitcoin was the first cryptocurrency ever invented and is sometimes referred as the "granddaddy" of crypto. However, bitcoin has several major limitations that prevent it from being widely used for payments, such as ecommerce purchases.

For one thing, bitcoin is slow. A block is produced every 10 minutes, and many sites require several blocks to be generated after the payment was made before crediting the funds.

It can also be expensive. At times, bitcoin minor fees (a fee required to send bitcoin) can reach as much as 15.00 USD or more.

And, that's why stablecoins were invented.

By definition, a stablecoin is a blockchain-based token (also referred as simply "crypto") that has its value pegged to something with stable price. Most frequently it's a national currency, such as US dollar, euro, or yen, but can also be other things, such as gold, consumer price index (CPI), and more.

So, what are the benefits of stablecoins? The main benefit of using stablecoins as opposed to a crypto like bitcoin or ether is that the price of stablecoins is predictable and is not a subject of wild fluctuations. As such, stablecoins are a much more superior as a store of value and a medium of exchange.

We will not talk about different types of stablecoins too much here and leave it for another article.

Sending bitcoin or ether can get very expensive. During the times of peak demand, miner fees can be as high as 15 USD per transaction. (At the time of this writing, the fees are around 0.50 USD on both of these blockchains.) One can say that even these fees are still significantly below what banks typically charge for money transfers, which is at least 25 USD for domestic and 40 USD for international. But these fees are way too high for crypto.

Most stablecoins can be transferred for fractions of a cent. For example, currently, the fee to transfer USDC on Polygon blockchain is only 0.003 USD (0.3 cent).

Of course, if you wish to transact with stablecoins on Ethereum blockchain, you still have to pay the Ethereum miner fees, which can be high. But most stablecoins exist on a number of EVM-compatible blockchains, sidechains, or rollups, so you have an option of extremely low transaction fees when using stablecoins as opposed to bitcoin or ether.

Using stablecoins is also very quick in comparison with bitcoin. A time to produce one bitcoin block is about 10 minutes. Many sites, such as exchanges, require at least 6 blocks to be produced after they receive the transaction to credit funds. This requirement is to prevent double spending. So, it may take you as long as 60 minutes to send bitcoin and have it credited by an exchange.

Many of these chains and rollups provide an almost instant transaction confirmation time, which is comparable to using credit card payments, but for fractions of a cent and without chargebacks.

Did you know that when you pay with bitcoin or another unstable cryptocurrency for products, you are overpaying on average 1% - 1.5%? This happens because of something called the "spread."

You see, merchants don't want to receive settlements in unstable coins like bitcoin. When a typical payment processor receives a payment in bitcoin from a buyer, it atomically converts it into US dollar. This conversion is not free. Conversions are usually performed by exchanges. These are platforms where market makers place buy and sell orders to allow other people, "takers," to instantly convert their crypto into something else. These market makers make money by earning the spread or a difference between the buying and selling price.

The platform that operates the exchange takes a trade commission on top of the spread. Finally, the payment processor typically adds its own markup on the price of bitcoin, which by the way is not usually advertised or even disclosed to the buyers. A typical payment processor markup over the average market exchange rate is about 1% - 1.5%.

In contrast, when you pay for products or services with stablecoins, there is no conversion. If the product is priced in US dollars and the coin is pegged to US dollar, the amount you'll pay in coins is exactly the same as the price of the product. There is no markup or hidden fees for paying with stablecoins.

You probably noticed that there isn't much you can do with bitcoin, except for holding it and sending to other people. This is not the case with stablecoins! Stablecoins are programmable money. This means that a program running on a blockchain can manage the flow of these coins. These programs are called smart contracts.

There are many applications of smart contracts. Some of the most common ones are lending, decentralized exchanges, and more. ATLOS is also using smart contracts to process payments. This has many advantages over other custodial payment processors. It offers:

Yes, stablecoins proved themselves to be a reliable store of value and a medium of exchange. And, that's why they are some of the most popular cryptocurrencies out there. In fact, even very large companies, such as Visa, are now providing an option to settle funds in stablecoins for merchants.

One word of caution, stick to only well-known reputable stablecoins. Remember anyone can launch a new token on blockchain and call it a "stablecoin." The name alone does not guarantee anything. We will talk more about the different types of stablecoins in the next article.